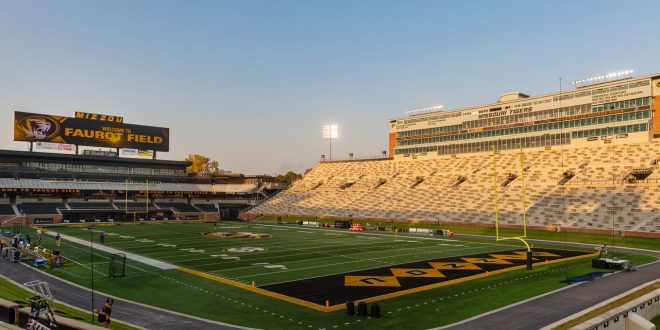 (KTGR.com) — Mizzou announced earlier this week a scheduling change for the 2022 football season in an understated move that should be considered a definite win for the program.

The Tigers had been scheduled to open the year on September 3 with a visit to Murfreesboro, Tennessee to take on Conference USA opponent Middle Tennessee State. Instead, Mizzou will host Louisiana Tech in CoMo on that date. Though it may seem like a minor change for Missouri, it’s one for which Tigers fans should be thanking athletic director Desiree Reed-Francois.

The three-game series between Missouri and MTSU, which was originally scheduled by a previous administration, included games in 2016, 2022 and 2023, with the middle game set to take place in Murfreesboro this coming fall. The Tigers lost the first edition of the series in a horrifying defensive effort in Barry Odom’s first season as Mizzou head coach, 51-45—the homecoming game for Missouri that season. Yikes.

With a new athletic director and new head football coach at the helm in the present-day, the Missouri athletic department did what it needed to do to erase the curious decision to agree to visit a non-traditional Group of 5 program in the first place, wiping the game from the schedule to ensure a seventh home game at Memorial Stadium for Mizzou fans in the upcoming campaign.

As an SEC program, Mizzou can’t be afraid to throw its weight around a little bit. While some might consider it unseemly to force your way out of a contract like this one, it’s par for the territory for the kind of program Mizzou aspires to be in the best football conference in America.

Dropping a bag of money to MTSU to secure a better likelihood of a season-opening dub is good. https://t.co/JnWs5tmcag

Bottom line: It was in Missouri’s best interest to get that additional home game, and to avoid starting out a pivotal season of Eli Drinkwitz’s tenure with consecutive non-conference road games. That wasn’t a sensible plan, and Mizzou should be commended for drafting a new one. Mizzou pushed the niceties to the side and figured out a better way forward.

Sure, it’s a bummer for a Middle Tennessee program that probably would have gotten a kick out of hosting an SEC school for their season-opener next year, but it’s not Mizzou’s job to feel bad about that. While I don’t know the exact details for how Mizzou wiggled its way out of the commitment to visit the Blue Raiders while somehow managing to keep the third game of the original series intact—the third leg is still scheduled for 2023 on Faurot Field—my assumption would be that a bag of money transferred from Mizzou to MTSU probably played a role.

If that was indeed the case, it was money well spent. Prioritizing its fans and seeking out every competitive advantage for the football program should be the name of the game for the Mizzou athletic department.

With this week’s announcement of a scheduling switcheroo for 2022, the Tigers found the bulls-eye.