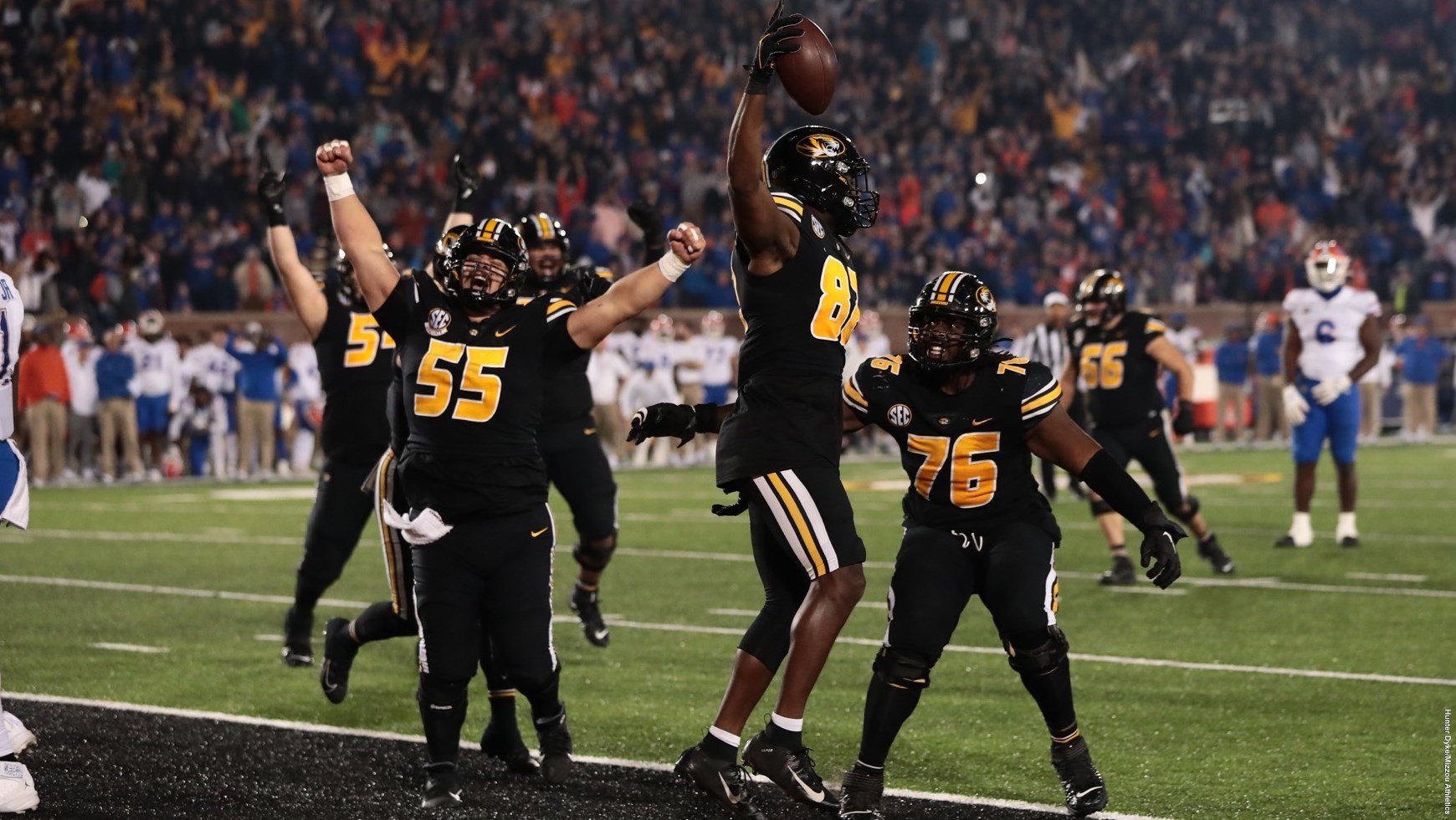 COLUMBIA, Mo. – A Tyler Badie touchdown run and a Connor Bazelak-to-Daniel Parker two-point conversion pass in the first overtime period gave the Missouri Tigers (6-5, 3-4) a 24-23 victory over the Florida Gators (5-6, 2-6) and made them bowl eligible for the second consecutive season.

Florida scored first in overtime on a wide receiver reverse pass by Trent Whittemore to quarterback Emory Jones for a six-yard score.

Missouri wasted no time to enter the end zone. Badie ran to the left for 12 yards and then to the left again for a 13-yard touchdown. Head coach Eliah Drinkwitz chose to go for the win right there – and after Bazelak executed a series of fakes in the backfield and falling backwards under pressure, he lofted a pass to the wide-open Parker for the winning points.

Missouri held a 9-6 halftime lead, but Florida drove 50 yards on its first possession of the third quarter for a two-yard touchdown run by Dameon Pierce to take a 13-9 lead.

The Tigers went three-and-out three times in the third quarter, but late in the period Badie started to get going. On his final three carries of the third quarter, he ran for 65 yards. For the game, he ran 27 times for 146 yards with 127 of them coming after halftime. He now has 1,385 yards rushing yards this season to stand third on the single-season list.

Missouri took a 16-13 lead early in the fourth quarter with a seven-play, 85-yard drive. Bazelak made a nice pump fake then hit tight end Niko Hea with a 41-yard scoring pass down the right sideline. It was the longest gain of Hea’s career. His previous high was a 26 yarder he caught in the second quarter. He finished with three receptions for 68 yards.

For the game, Bazelak completed 15-of-26 passes for 165 yards, one score and one conversion.

Florida got the ball back and converted a big fourth-and two at the Missouri 41-yard line with a 17-yard pass to Malik Davis down to the Tiger 24. On the ensuing third down, linebacker Blaze Alldredge dropped Pierce for a one-yard loss and the Gators opted for a 33-yard field goal by Chris Howard that tied the score.

The first half was a battle of field goals with Mevis outkicking Howard, 3-2. Mevis’ first kick of 39 yards tied the score at 3-3 in the first quarter. His second came from 46 yards and gave the Tigers their first lead at 6-6 with just under seven minutes to play in the second quarter.

Bottled up for most of the first half, the Tiger offense finally got moving late in the half, aided by two Florida penalties. Bazelak led a nine-play, 74-yard drive down to the Gator eight-yard line. The big play was a 50-yard bomb to Tauskie Dove. But after a sack on third down, Mizzou had to settle for a 31-yard Mevis field goal for a 9-6 halftime lead.

Missouri’s defense gave another strong performance, holding Florida to 360 total yards including just 93 on the ground. The Tiger defenders had 11 tackles for loss including two QB sacks. Chad Bailey was the top tackler with nine – eight solos – and Trajan Jeffcoat had 3.5 tackles for loss, with one sack.