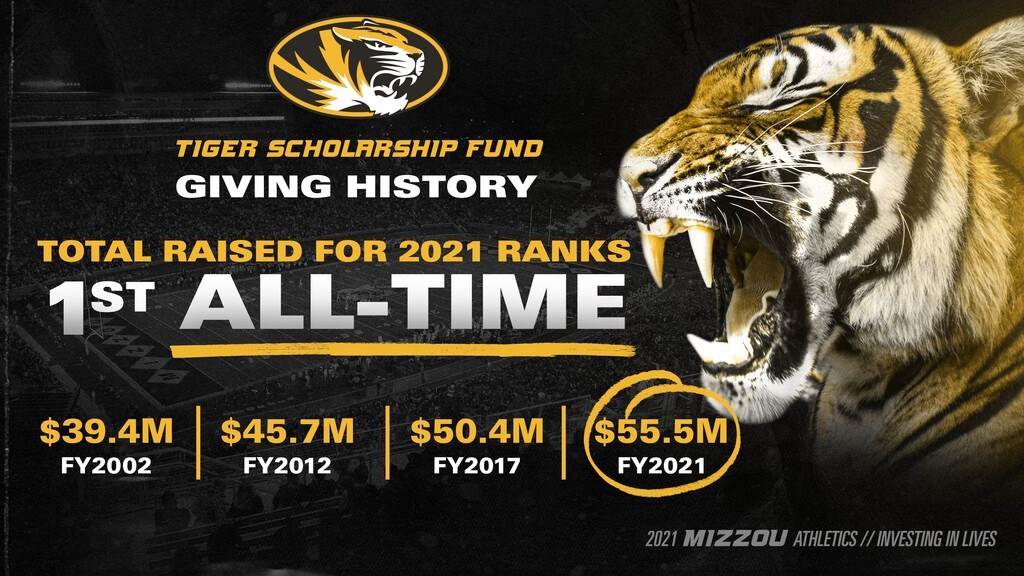 “We are incredibly grateful to the thousands of loyal Tiger Scholarship Fund members who have come alongside Mizzou Athletics in support of our student-athletes, coaches and staff through their continued generosity,” said Mizzou Director of Athletics Jim Sterk, who has overseen three of the five largest fund-raising years in the department’s 130-year history since his arrival in August 2016. “Our donors have a tremendous passion for Mizzou, and to set a new record in the midst of a global pandemic speaks to their loyalty and desire to invest in our future.

“Every dollar raised by the Tiger Scholarship Fund is used to provide an outstanding academic, athletic and social experience for our student-athletes, and we deeply appreciate this outpouring of financial support by our donors,” he added. “Intercollegiate athletics is in the midst of great change and it will be critical that we continue to grow our donor base in future years in order to provide resources necessary for our teams to compete for conference and national championships.”

The record-breaking $55.5M total was more than 260% of TSF’s established 2020-21 goal of $21M. It marks only the second time in TSF history that it has broken the $50M threshold. The 2020-21 record total was bolstered by 11 seven-figure or eight-figure gifts, which is tied for the most seven or eight-figure gifts in Mizzou Athletics history.

“On behalf of Mizzou’s student-athletes, coaches and staff, I would like to extend thanks to all of our fans who made a commitment to support the Tiger Scholarship Fund and contributed to this record-breaking year,” said Mizzou Deputy Athletics Director for External Operations Ryan Alpert. “This extraordinary display of support from Mizzou fans is both inspiring and humbling to all of us who love the Tigers, and provides great momentum as we look toward the future.”

With the outpouring of support from TSF members, Mizzou student-athletes continued to thrive both academically and athletically during the 2020-21 academic year.

In the classroom, the 550 men and women who donned the Black & Gold in 2020-21 extended their record string of 3.0 or higher semester grade-point averages to nine-straight by registering a 3.214 spring 2021 mark, the second-highest spring mark in program history, and a fall-record 3.181 GPA. Twelve teams had a 3.00 GPA or above for the fall, while 14 teams accomplished that feat in the spring. In addition, 204 Mizzou student-athletes earned University Dean’s List honors for at least one term, 258 received SEC Academic Honor Roll recognition, including 86 SEC First-Year Honor Roll members, and 105 earned their Mizzou degree.