Soccer Prepped For Matchups Against LSU and Vanderbilt 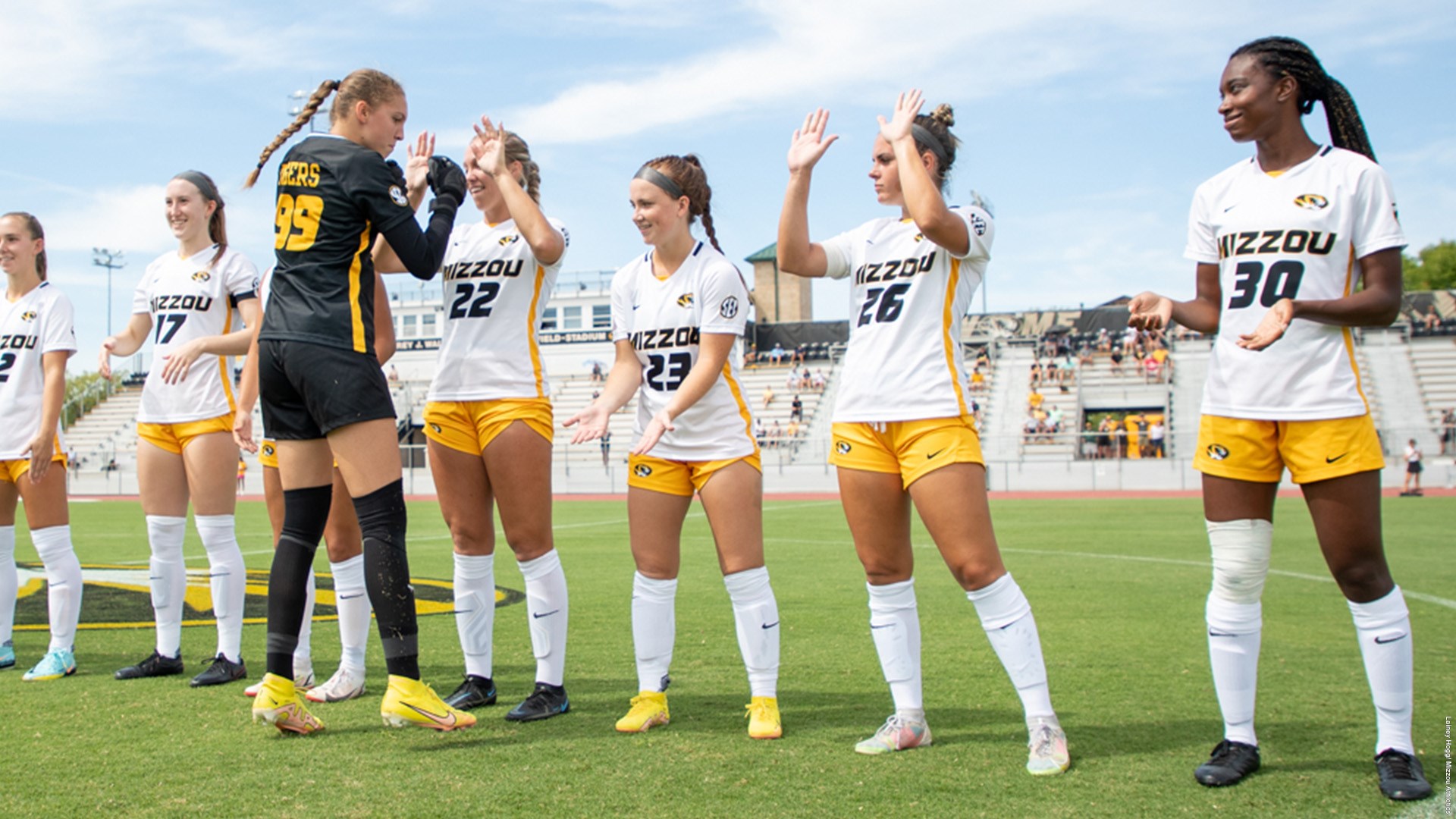 COLUMBIA, Mo. – The University of Missouri soccer team will hit the road to Baton Rouge, La. to face LSU Thursday, Sept. 22, before returning home to welcome Vanderbilt Sunday, Sept. 25. Those matchups are scheduled for 6 p.m. and 1 p.m. CT, respectively.
Mizzou enters the week after its biggest win of the season yet, defeating No. 23 Auburn, 1-0, Sept. 16. Meanwhile, LSU (6-1-2) is coming off a win over Vanderbilt (6-1-1), 2-1, Sept. 18, as the Tigers handed the Commodores their first loss of the season.

DOBBS FOR THE DUB
It only took sophomore Kylie Dobbs 17 seconds to help secure the 1-0 win against No. 23 Auburn, Sept. 16. Dobbs goal came on her first two touches after subbing in, and was assisted by freshman Jessica Larson and reshirt junior Megan Oduyoye. With that goal, the Tigers earned their second win over a ranked opponent under Head Coach Stefanie Golan. The last time Mizzou bested a top-25 opponent was against No. 13 Ole Miss, Oct. 21, 2021, in a 2-1 win.

NATION WIDE
Mizzou has been putting the pressure on the opposition this season, earning 7.62 corner kicks per game, a number that is tied for eighth in the nation and is second in the Southeastern Conference. The Tigers most recently took nine corners against Auburn, Sept. 16.

TOP TIGERS
Sophomore Kylie Dobbs earned her second game-winning goal of the season Sept. 16 against No. 23 Auburn. The Tigers went on to upset the formerly ranked team, 1-0.
Junior Grace Pettet has played every minute for the Tigers this season, totaling 720 minutes this season. Pettet was instrumental in the upset of Auburn, leading the backline in the shutout effort.

LAST TIME OUT
The Tigers kicked off conference play by defeating the No. 23 ranked team, Auburn, 1-0, Sept. 16. Mizzou scored its first and only goal of the game in the 33rd minute after Sophomore Kylie Dobbs came off the bench to sneak one past Auburn goalkeeper Maddie Prohaska. With the pass coming from freshman Jessica Larson, Missouri broke the tie and held the lead going into the half.
By the end of the contest, Mizzou outshot the visiting Tigers 12-4, eight of which were on goal. Missouri also racked up nine corner kicks compared to Auburn’s six.

ALL-TIME: LSU
Mizzou has an overall record of 2-6-1 against LSU. Moreover, Missouri has not beaten LSU since Oct. 26, 2017 when they bested the other Tigers 2-0 in Columbia, Mo.

LAST MEETING: The Tigers
The Tigers recorded a 1-1 draw against LSU in a hard-hitting match that featured plenty of end-to-end action. Mizzou’s lone goal-scorer, Bella Alessi, knocked in her first goal of the season in the 47th minute to equalize the match, thanks to a crafty assist from Madilyn Hamline.
In overtime, Mizzou continued to pressure, earning three corner kicks, but was unable to claim the game-winner as the match ended in a draw after 110 minutes.

ALL-TIME: Vanderbilt
Missouri is 6-4-2 all-time against Vanderbilt, dating back to 2008. Additionally, the Tigers have lost four of the last five games versus the Commodores since 2017. Prior to the 2017 season, Mizzou had not been beaten by Vanderbilt.

LAST MEETING: The Commodores
The Tigers fired the first three shots of the match, but Vanderbilt was quickly able to take control.

ALL-TIME: SEC
Mizzou soccer is in its 27th season of competition and has accumulated an overall record of 58-76-15 against Southeastern Conference teams. The Tigers have seen the most success versus Kentucky, holding a 9-3-1 record.
Moreover, since Missouri joined the SEC in 2012 it has totaled a record of 45-49-11 against league competition.

RANKED OPPOSITION
As it stands, Mizzou has three opponents on its 2022 schedule ranked by United Soccer Coaches. The Tigers played then-No. 1 North Carolina, Sept. 1, at home, and No. 23 Auburn, Sept. 16. At the end of the season, Missouri takes on No. 5 South Carolina (Oct. 27) in Columbia, S.C.

SENIOR SPOTLIGHT
For the remaining home games this season, Mizzou will honor a senior prior to each match. The ceremony will take place on the field 15 minutes before kickoff.
This week, the Tigers will honor Isabella Alessio. The senior from Chicago, Ill. has played over 1300 minutes in 17 games over her three years as a Tiger. Alessio has totaled 51 saves and two shutouts. Bella has been a proven leader over her career at Mizzou and is also an SEC Academic Honor Roll Award Winner.

FOLLOWING THE TIGERS
The contests against LSU and Vanderbilt can both be streamed on SEC Network+. Fans can also follow along on live stats, found on MUTigers.com, or on Twitter by following @MizzouSoccer.

UP NEXT
Mizzou soccer will host Mississippi State at Walton Soccer Stadium Friday, Sept. 30, with first kick scheduled for 7 p.m.