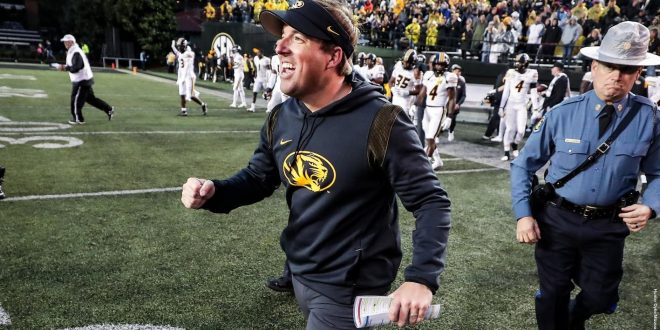 The preseason battle for Mizzou’s starting quarterback spot has come to its conclusion.

The St. Louis native played in five games last season, and started the Tigers’ most recent game in the Armed Forces Bowl against Army.

HEAR FROM THE BIG SHOW HOSTS

Andy Humphrey: “There aren’t too many reasons to complain about the choice Eli Drinkwitz made here. After what we saw from Brady Cook in his first chance to start a college football game against Army last year, we knew he would automatically be the front-runner to win the job in 2022. His accuracy and efficiency in that one game offered up a glimmer of hope for what the position could look like for Mizzou in the future.

It didn’t mean that it would be easy for Cook. Drinkwitz preached all offseason long about having some experience at the position for the start of his third year at the helm. While Cook brought some to the table, it didn’t match the experience of Jack Abraham, who the Tigers eventually brought in to also compete for the job. Add in the fact that fellow youngsters Tyler Macon and Sam Horn were ready to prove their athletic upside could remove the need for experience.

In the end, however, it’s telling that it only took nine days into preseason workouts for the coaching staff to publicly decide Cook was the man. With all the factors that go into choosing a starter (skill set, coachability, knowledge of the playbook, etc.), usually this process can take time. But it’s clear that the coaches see a clear gap between Cook and everyone else. That doesn’t necessarily mean that we won’t see anyone else out there at some point. It might mean either Horn or Abraham needed more time to get up to speed with a new program. The two questions that loom large now will be 1) how will Cook fare now that he knows he’s the main guy, and 2) how long of a leash will he have if things start to go south?

Last of all, and probably most notably, it’s hard not to get behind a guy like Brady Cook as Mizzou’s QB. There aren’t too many players in today’s college football world that stick it out as much as he did to earn this chance. He stuck around despite sharing a backup role with a guy who had an extra recruiting star over him in high school, getting little playing time even during Connor Bazelak’s struggles last season, then watch his head coach bring in another four-star guy AND a 25-year old grad transfer. If he had decided to look elsewhere to play, I don’t think we could’ve blamed him for it. But, as he’s said before, the St. Louis native saw value in exhausting every chance he had to become the starting quarterback for the team he grew up watching. If fans can’t root for a guy with that kind of commitment, then what are we even doing here?”

Brenden Schaeffer: “On the surface, Brady Cook as Mizzou’s QB1 is probably the right decision given the options Eli Drinkwitz had at his disposal. Cook doesn’t have a ton of experience as a collegiate quarterback, but Tyler Macon has even less. Sam Horn hopefully has a bright future, but he’s only been on campus for a short time; a true freshman waltzing in and winning the job outright was never realistic. Mississippi State transfer Jack Abraham does have some FBS starting experience, but none of it is recent. And he only ended up at Missouri after Drink swung and missed on more high-profile options in the transfer portal.

With the ability to protect the football, make the necessary throws and scramble for yardage when the situation calls for it, Cook has an intriguing skill set. It’s why folks were clamoring for him to get a look last season when Connor Bazelak was bumbling around the field at less than full physical—and perhaps mental—strength. Drinkwitz’s bizarre refusal to turn to another quarterback sooner a season ago does linger on me as I soak in the news that Cook is cemented as the guy so early in fall camp. For all the talk of a wide-open camp battle at the position, did the others ever really have a shot to overtake the incumbent?

If not, that’s fine—this choice is too important to Drink’s tenure to have the coach go with anything other than his best option. But the combination of Drinkwitz’s heavy activity in chasing transfer QBs this off-season and the notion that Cook wasn’t deemed qualified to tap in for Bazelak last year until it was far too late causes me to wonder how confident Drinkwitz really is in this player.

Perhaps the swiftness with which this decision arrived is a better indication than actions of the past. Cook securing the job this early into fall camp suggest to me that it was an inevitable outcome. That the typically ambiguous head coach actually announced the decision to the public this early in the process only reinforces that belief.”