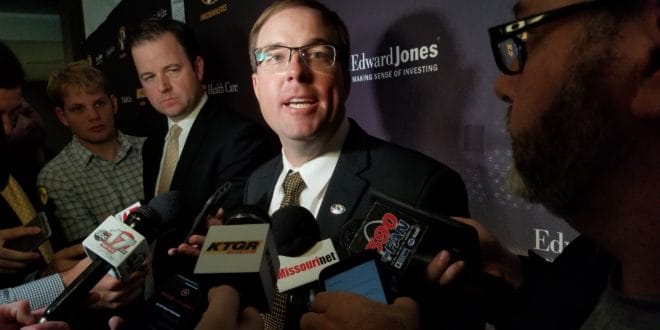 Mizzou Football has officially hired its next leader.

The UM System Board of Curators approved a contract with 36-year-old Eliah Drinkwitz on Tuesday morning, to be the 33rd head football coach in Mizzou history.

Drinkwitz comes to Columbia by way of Appalachian State, where his first and only season as an FBS head coach was very successful. He led the Mountaineers to a 12-1 record and the Sun Belt Championship this past season.

A native of Norman, Oklahoma – who lists his hometown as Alma, Arkansas, where he got his first high school head coaching job – Drinkwitz has some ties to current Auburn head coach Gus Malzahn. Drinkwitz coached with Malzahn at Springdale High School in Arkansas in 2004, then again on his staff at Arkansas State in 2012. His most recent Power Five experience came as the offensive coordinator of North Carolina State from 2016 to 2018, before taking the head job in Boone, NC.

His background on offense helped lead this year’s Mountaineers to be the ninth-ranked scoring offense in FBS (at 39.4 points per game), and a top-25 outfit in rushing yards per game and in overall passing touchdowns.

Drinkwitz told the crowd at his introductory press conference that he will start out as head coach and offensive coordinator for Missouri, and call the offensive plays.

Missouri paid handsomely to bring Drinkwitz to Columbia. His contract is a six-year deal worth $4 million a season. If the Tigers win eight games or a bowl game in either of his first two seasons, Drinkwitz will get an automatic one-year extension and a $100,000 raise. If he met every incentive possible in his contract (winning the CFP National Championship), he could earn an extra $850,000 in one season. His various incentives are to be earned every year.

If MU fires Drinkwitz without cause (i.e. for not winning enough), it owes him 70% of the total remaining value on his contract. Should the new coach want to leave Missouri, his buyout is less steep… $6 million if he leaves before January 15th, 2021, $4 million before the same date in 2022, and declining by $1 million a year annually after that.

The new coach has $5.2 million with which to hire his ten assistant coaches, hires which Drinkwitz says will start to happen as he hits the recruiting trail over the next several days. There’s $1.2 million available to hire support staff, with a separate pool for strength and conditoning staff.