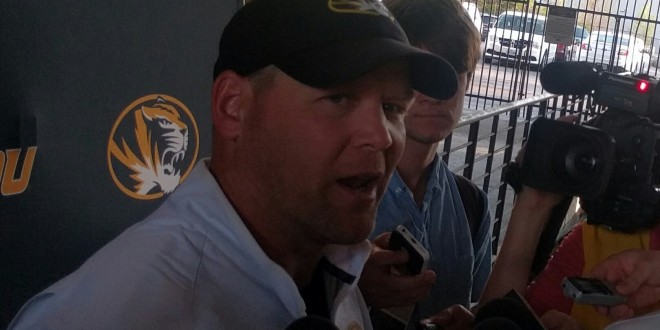 The homecoming for a True Son is over in Columbia.

Missouri Athletic Director Jim Sterk announced Saturday morning he had fired head football coach Barry Odom after four seasons in the job. Odom finished his tenure with a 6-6 record in 2019, and 25-25 overall.

“I want to thank Coach Odom for his contributions to our program,” Sterk said in a news release. “He and his staff have worked diligently during the past four years. Coach Odom has represented our program with integrity and dedicated himself to developing our student-athletes on and off the football field for which we are grateful. We wish the very best for him and his family in their future endeavors.”

Odom arrived as head coach in time for the 2016 season in the wake of longtime head coach Gary Pinkel’s retirement due to a cancer diagnosis, and following a player protest that got international attention. During his tenure, Missouri built a new $100 million football-only facility in the south end zone of Memorial Stadium, and Odom took the program to bowl games in 2017 and 2018.

On the field, results were mixed. Odom earned an 8-5 record in 2018, but also had a 2-19 record against Power Five teams that ended seasons with winning records.

“As a program, we had tremendous momentum coming into the 2019 season with the opening of the new south end zone facility as well as other strategic investments in our football program,” Sterk said. “However, we lost a great deal of that energy during the last half of the season. This decision was difficult to make but was necessary.”

“Mizzou enjoys a winning football tradition and has the necessary resources and commitment to compete at the highest level. We strive to achieve excellence, and we expect to compete for Southeastern Conference titles, consistently play in the postseason and represent Mizzou the right way on and off the field.

Odom had spent 18 seasons at Missouri as a player, staff member, and coach. Sterk was scheduled to hold a press conference at 4pm Saturday to discuss the decision, and the nature of the coaching search ahead.

“A national search is underway and confidentiality during the process is critical,” Sterk said. “Thus, I will have no further public comments regarding the search process until the announcement of our next head football coach is made.”