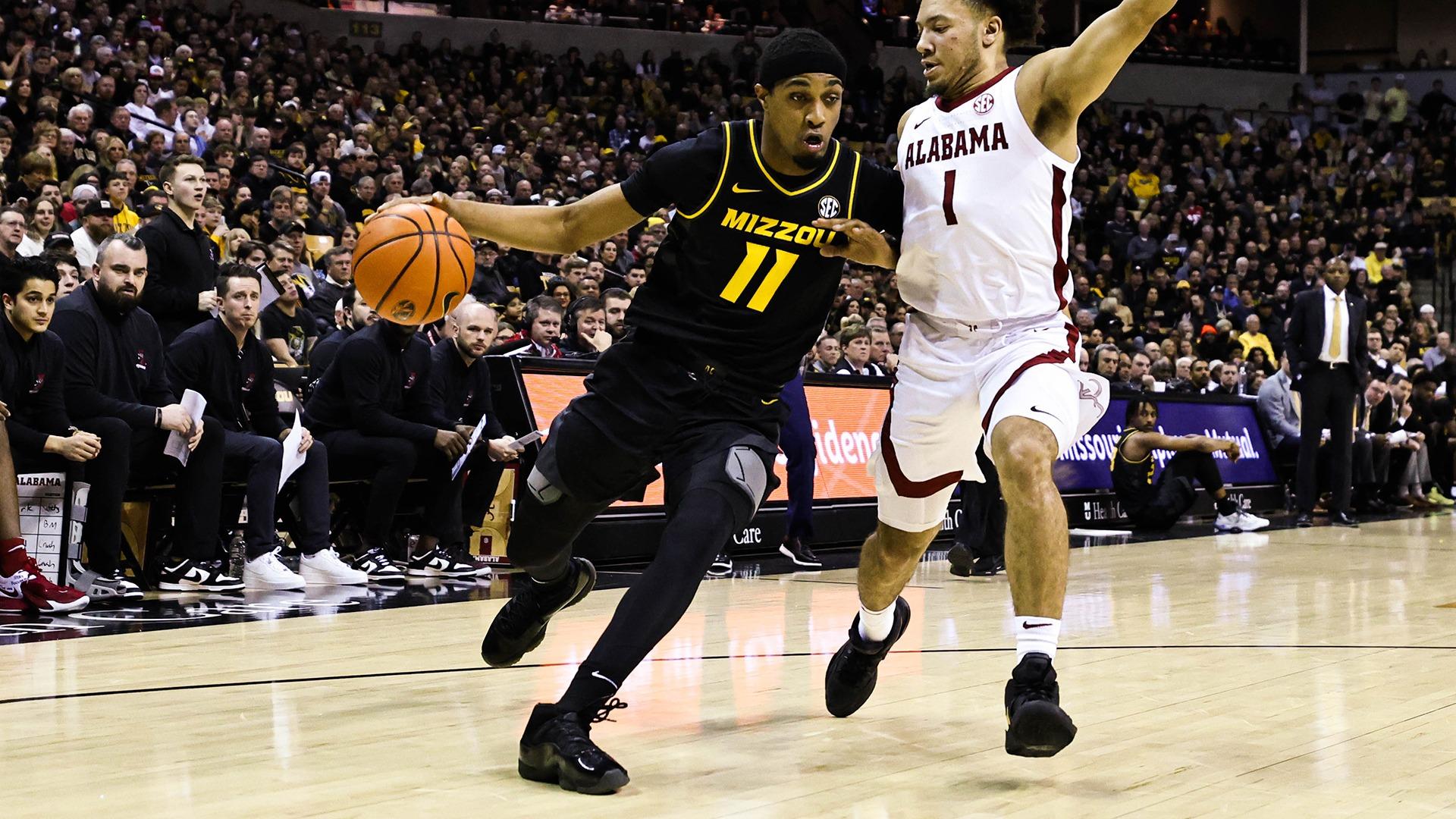 The Missouri men’s basketball team hits the road for a key SEC contest at Ole Miss this week. The schools are set to meet on Tuesday night with a 6 p.m. tipoff on SEC Network.

ABOUT THE TIGERS
• Missouri is 14-5 and 3-4 in SEC action – receiving votes in both national polls.
• The Tigers split a pair of games last week against ranked foes, defeating No. 25 Arkansas before falling to No. 4 Alabama.
• Kobe Brown, who missed the game with Alabama, leads the Tigers with 15.7 points and 5.6 rebounds.
• Overall, four Tigers are scoring in double figures with D’Moi Hodge (14.0), DeAndre Gholston (10.7) and Noah Carter (10.3) following Brown.
• Nick Honor leads Mizzou with 3.3 assists.
• Mizzou ranks 13th in the country with a scoring offense of 83.1, while allowing 75.9 points.

ABOUT THE REBELS
• Ole Miss owns a 9-10 record with a 1-6 mark in SEC action.
• The Rebels split a pair of road games last week, beating South Carolina before falling at Arkansas.
• Matthew Murrell is the lone Rebel scoring in double figures with 14.9 points per game, while also leading the team with 2.5 assists.
• Myles Burns collects a team-leading 6.3 boards.
• The Rebels average 67.0 points offensively, while allowing 65.5 on defense.

SERIES HISTORY
• Ole Miss holds a 15-6 advantage against MU but half of the Tigers’ six wins in the series came last season with three victories over the Rebels.
• Mizzou earned its second all-time victory at Ole Miss with a 25-point win one year ago – the largest margin by either team in the 21-game series.
• The Tigers capped the three-game sweep with a 72-60 win in the SEC Tournament.

TOP-20 SCORING OFFENSE
• One of the biggest keys to success this season for Mizzou is owning a top scoring attack.
• Mizzou enters the game ranked 13th nationally with an offense of 83.1 points.
• In fact, the Tigers’ 83.1 points currently ranks as the sixth-best mark in school history and their highest in 33 years.

TARGETING 70 POINTS
• While the Tigers are averaging well over 80 points this season, the magic number is just 70 for MU.
• MU has won its last 17 games when scoring at least 70, including a perfect 13-0 mark this year.
• On the opposite end, Mizzou is just 1-5 this year when held under the target – losing 23 of its last 24 games overall with 69 or fewer points.

NUMBERS BEHIND THE WINS
• The biggest difference for the Tigers in wins and losses is on the offensive end.
• Overall, Mizzou is averaging 89.4 points in its 14 wins this year but just 65.4 in its five losses.
• MU is also shooting more than 12 percent higher in wins and 15 percent better from 3-point range.

FREE-THROW RATE
• Getting to the charity stripe has also been a key predictor this season.
• In Mizzou’s seven SEC contests, the team that shoots more free throws has won each contest.
• Overall, the Tigers are averaging 33.0 attempts in their three SEC victories but just 19.0 in their four conference losses.

MO MOMENTUM
• Junior Mohamed Diarra is enjoying the best basketball of his Division I career.
• After appearing in five of the first 15 games with just 18 minutes played, Diarra has played in the last four contests with 42 minutes of action.
• In his expanded role over the last four games, Diarra has averaged 4.0 points, 4.8 rebounds, 1.5 steals and 0.8 blocks.
• Saturday versus No. 4 Alabama, Diarra set career highs with eight points and 12 rebounds. His eight points were just two shy of his career total, while his 12 boards were one more.

OSCAR ROBERTSON WATCH LIST
• The Tigers were missing one of the nation’s top players in their last game in senior Kobe Brown.
• Last week, the forward was named to the Oscar Robertson Trophy Midseason Watch List – one of 50 players on the list for the USBWA National Player of the Year award.
• The senior forward leads MU with 15.7 points and 5.6 rebounds – shooting 56.0 percent overall and 40.8 percent from 3-point range.

STAY HOT, KOBE BROWN
• The Tigers are hoping that once ready, Kobe Brown picks up where left off as he was enjoying some of the best basketball of his career.
• Brown has led the Tigers in scoring in six of his last seven games – averaging 20.0 points during the stretch that included four games versus ranked opponents.
• Overall, Brown has led Mizzou in scoring in nearly half of the team’s games this season (9-of-19) and in boards on 11 occasions.