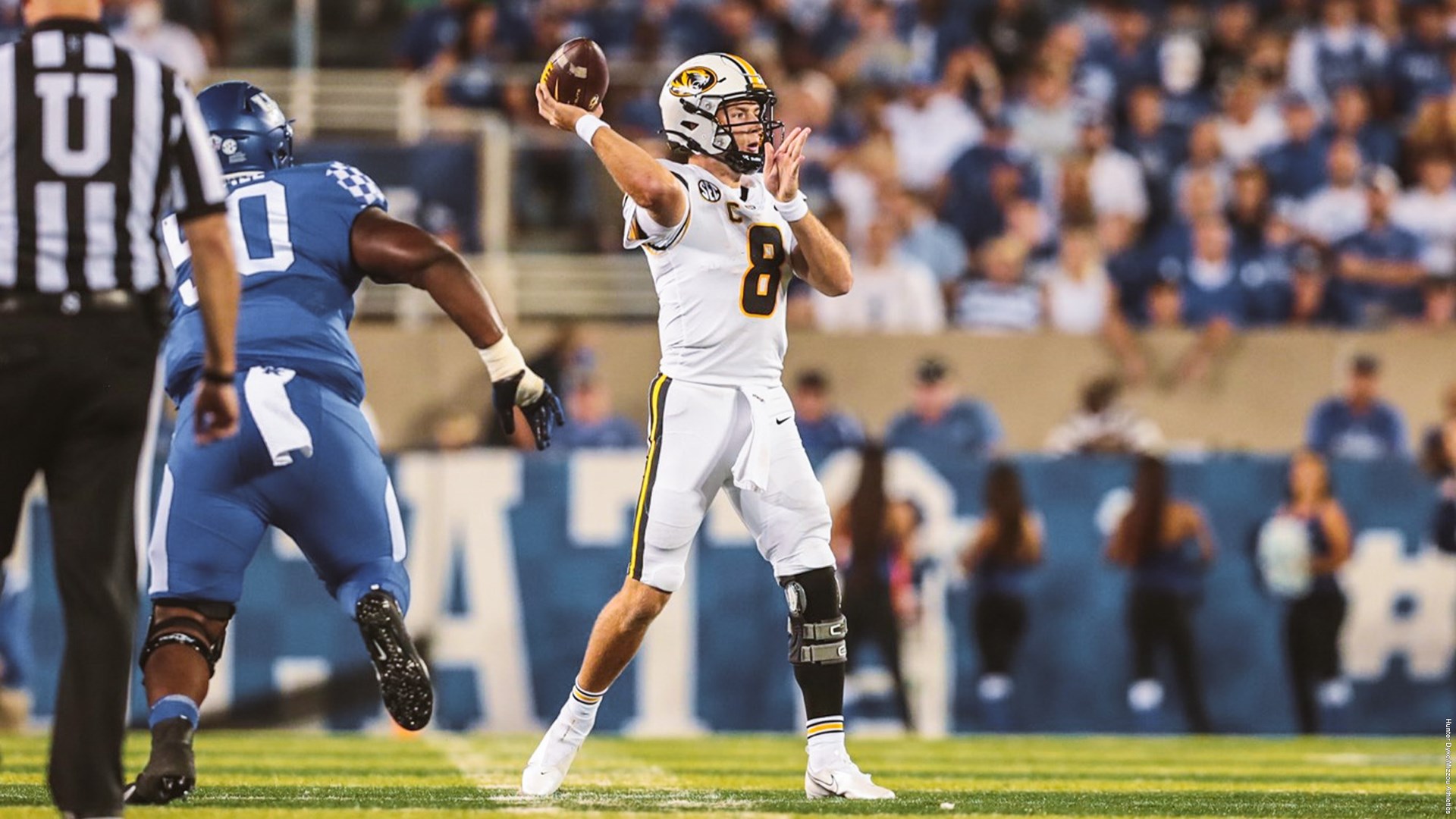 LEXINGTON, Ky. – The Kentucky Wildcats got off to a fast start, overcame two first-half turnovers and a fierce comeback by the Missouri Tigers and went on to a 35-28 victory in the SEC opener for both teams.

Playing from behind the entire game, Mizzou (1-1, 0-1) finally knotted the score at 28-28 early in the fourth quarter when quarterback Connor Bazelak dumped off a pass to Tyler Badie who maneuvered his way 17 yards down the sideline for a touchdown.

But on Kentucky’s next possession, the Wildcats (2-0, 1-0) put together a five-play, 75-yard drive that was capped off by an eight-yard touchdown run by Chris Rodriguez to take a 35-28 lead. Rodriguez finished the game with 27 carries for 207 yards and three scores. He also caught a pass for a TD.

Missouri wasn’t done. After the Tigers had to punt, Kentucky drove down the field and set up for a 37-yard field goal attempt by Matt Ruffolo with 2:07 to play. The kick was blocked by Mizzou’s Blaze Alldredge and recovered by Kris Abrams-Draine. The Tigers took over near midfield and moved to the Kentucky 37-yard line. But on third down, Bazelak was sacked for a loss of eight yards and a fourth-down pass intended for Dominic Lovett was broken up.

Kentucky took over on downs and ran out the clock.

Bazelak completed 34-of-51 passes for 294 yards and four touchdowns with one interception. His four TDs tied his career-high set last year against LSU and he crossed the 3,000-yard passing plateau. He has passed for 3,061 yards in his brief career.

Kentucky jumped out to a quick lead in the first quarter, scoring on their first two possessions to take a 14-0 lead.

Mizzou answered by movin 75 yards, with RB Tyler Badie accounting for most of it with 27 yards rushing and 24 yards receiving before MU scored on a six-yard pass from Connor Bazelak to TE Daniel Parker.

In the second quarter, Kentucky regained its 14-point advantage, when Robinson caught a big 49-yard pass from Will Levis, who scored himself on a three-yard run to end a 92-yard drive.

Late in the half, Mizzou’s Jaylon Carlies forced a fumble that was recovered in the end zone by linebacker Chad Bailey. Bazelak then took the Tigers right down the field, and with four seconds remaining in the half, hit Keke Chism for a 17-yard TD pass that made the halftime score, 21-14.

On the first possession of the second half, Bazelak’s first pass was intercepted, and Kentucky scored two plays later to extend its lead to 28-14.

Missouri answered back by marching 75 yards in 10 plays and scoring on a six-yard shovel pass from Bazelak to Parker.

After the second, Missouri put together an 80-yard culminating with a 17-yard scoring pass from Bazelak to Badie to tie the score at 28-28.

Kentucky, though, answered with a touchdown drive that was spurred by a 28-yard screen pass from Levis to TE Justin Rigg, and Rodriguez took it the final eight yards for his fourth TD of the game that put the Wildcats back on top, 35-28.

Mizzou returns home to host Southeast Missouri State next Saturday (Sept. 18), for a non-conference game against the FCS Redhawks. Kickoff is at 11:00 a.m. CDT and the game will be televised by the SEC Network on the SEC+ channel.