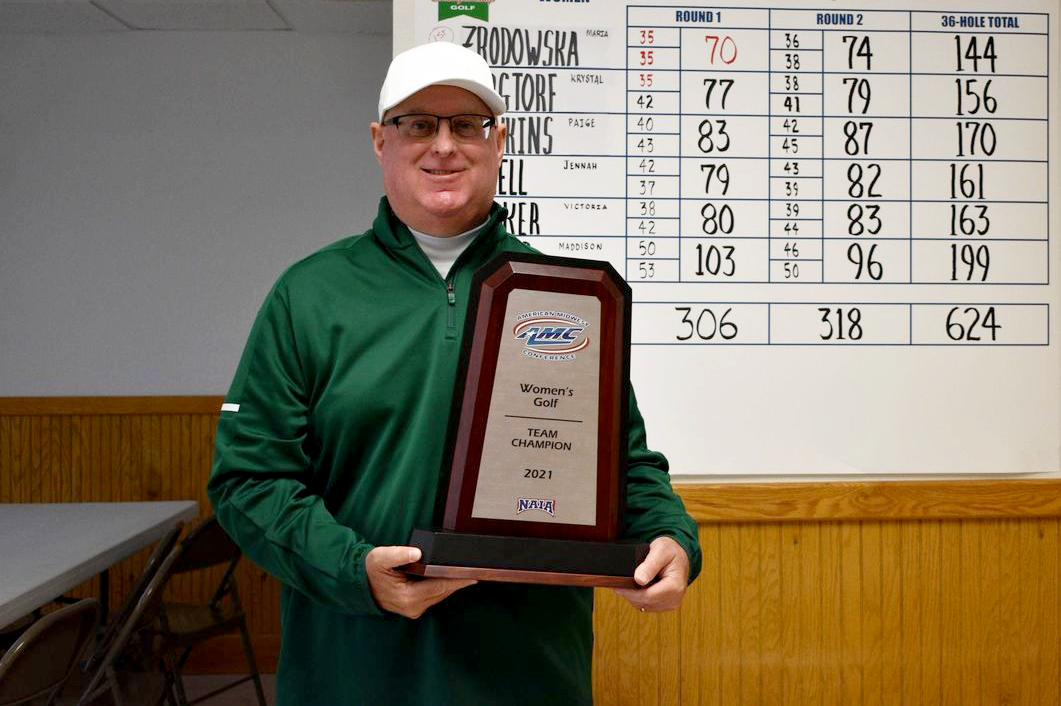 Columbia, Mo. – The Columbia College Athletic Department has announced the hiring of Barry Doty as the new Head Men’s and Women’s Golf Coach. Doty joins the Columbia family after an illustrious career at William Woods University.

Athletic Director James Arnold expressed his excitement in the hiring of Doty, “It’s not everyday that you have the opportunity to hire a coach with the track record of success and dominance of Coach Doty. Barry’s teams at William Woods have dominated the AMC and been a mainstay on the national scene for many years. The Cougar golf teams have taken big steps forward in recent years and I’m super excited to see where Coach Doty can lead them!”

A Hall of Fame inductee in 2017, Doty has led his teams to 31 NAIA National Championship appearances, earning runner-up four times; further, his teams earned nine top-four finishes and 16 top-10 finishes. He has coached two NAIA Individual National Runner-Ups during his time as well.

Some of Doty’s coaching marks include: earning 35 different Coach of the Year awards throughout the Golf Coaches Association of America, the NAIA Region, the Unaffiliated Grouping, and the American Midwest Conference. Doty was one the finalists to coach the United States National Team in 2014 in the Palmer Cup and was also one of the finalists to coach the United State Junior National Team in 2016 in the Toyota World Cup.

Doty’s coaching career at WWU was nothing short of fantastic. Overall, he collected a 2,944-880 record, including 197 tournament wins with the varsity squads and six tournament wins with the junior varsity teams over varsity competition. He has coached 58 All-Americans, 24 conference/region Players of the Year, two players named to the All-Nicklaus Team (top 24 player’s in men’s college golf in all of NCAA D1, D2, and NAIA), and two Phil Mickelson award winners (top freshmen in the country).

Coach Doty is set to officially start this new role on August 8th. “I am excited and honored to join the Columbia College family. I look forward to building on the golf program’s momentum established by John Utley, Michelle Parrish, and the student-athletes over the years. I would like to thank James Arnold and Columbia College for this opportunity. CC has a reputation for outstanding academic and athletic success. It is my goal to carry forward and uphold the proud traditions of Cougar athletics.”

This article is provided by Columbia Cougar Athletics
2022-07-28